This week my father starts chemotherapy to treat a tumor he has growing in the lymph nodes on the side of his neck. Last year when the season was changing he had moved himself from Vermont down to Chile to enjoy the southern summer months. This spring when it was starting to get cold he called me and told me he was planning on coming back up north to pass the summer months here. I suggested that he come stay with me for part of the summer.

He got to Portland mid July of this year. Due to a million circumstances, many of them consequences of his actions, he finds himself at 77 with no house, no partner, his personal belongings fitting into two suitcases and one shoulder bag, which he guards with his life. This shoulder bag contains both his passports, Chilean and American, and various other papers and forms which he refers to as his “documents.” “Mis documentos” he would say, when I was a kid, referring to whatever official paperwork was ascribed to various things in his life- his car, his house, his citizenship. Currently his Documents only pertain to his earthly form, paperwork that allows him to cross borders, and a few others that prove he belongs in this country and has the right to healthcare.

Within his first 5 days here I took him to the doctor to get some prescriptions filled. While we were there the very kind and patient doctor asked my father if he was aware of a swelling on the side of his neck.

Over the course of the next two months I dedicated myself, with so much invaluable help from my amazing partner, to get my father to doctors appointments, undergo testing, and figure out his diagnosis. It was challenging to find myself in the unexpected position of sole care provider, it was hard to act as translator, explaining to him as best I could in Spanish the medical jargon that doctors spouted at us in English, and it was hard to rearrange my expectations of his visit; this was to be a vacation, not a medical incident. Hardest of all, however, was confronting the reality of our relationship. To date, this is the longest consecutive amount of time I have ever spent with my father, and things surfaced that I didn’t expect.

An important theme in the personal work I have been doing lately is to understand how to assert my boundaries and to see, with as much clarity as possible, how I have allowed myself to sustain relationships with people who disregard and ignore my boundaries. Understanding the responsibility I have to make my needs clear, but also the fact that I can ask directly for respect, and then to take a step back and away in the event that I realize I am not receiving the respect I know I deserve. The respect I work very hard for.

My father is a recovering alcoholic. He drank heavily for most of his life, stopping only three years ago. As a result of this life long addiction he never developed coping mechanisms. Like all of us, he feels sadness, anxiety, and fear. But what comes out is anger, rage, and a notoriously short temper. For most of my life this short temper has been directed at his spouse and my brother. While he was living in Portland, it was directed squarely at me.

At the doctor’s office right after receiving his final diagnosis- stage 2 non-hodgkin’s lymphoma- my father started yelling at me in the hallway in front of nurses and patients. My transgression? Asking the doctor if I could have a moment alone with him so I could better grasp the scope of treatment and what I could expect as my father’s caregiver. Asking for a moment of personal space to address my fears and needs, without needing to translate or explain myself.

I understand that my father is deeply scared, deeply sad, and feeling vulnerable. I can see that his anger and poor behavior come from a place of fear. But how much responsibility do I have to be his emotional punching bag? To be berated and yelled at in public? Should I subject myself to poor treatment just because I understand that when he is insulting me, he doesn’t “really” mean it? How many times do I excuse his bad behavior?

There is a chance he could die from this cancer. And if not from the cancer, then from some other impending health issue, sooner rather than later. He is in an advanced stage of his life, in poor health, and he himself speaks of his imminent death. I suppose it could be seen as crass to write publicly (to the 10 people that might read this?) about the challenges I have with my father during his time of sickness. But the truth of the matter is that relationships don’t stop being complicated and challenging the minute death seems closer. I know that I need to move to a place of acceptance and peace regarding mine and my father’s relationship. But in order to get there, to find respect and understanding for my father, I also need to find respect and understanding for myself. I need to know my boundaries, the limits of what is ok and what is not ok for me to accept, I need to know when to stop giving and when to step away from that which hurts me.

Last fall at the urging of various important people in my life I took a memoir writing class. I was the youngest person in the class by at least 15 years. We were asked to write a piece using the prompt “and nothing was ever the same again” as the last line. This last line could be included or implied.

I feel a sense of guilt sharing this piece. I have always wanted to make this piece public, share it with more of my community. In my opinion it’s one of the best things I have ever written, and for me it illustrates a part of mine and my father’s relationship that I need to process. Stronger than the feeling of guilt is the understanding that sharing my experience is always valuable, and that there is never a “right time” to do self work and to dig deeper. It is on going and usually not convenient.

It is important for me to start working on processing my relationship with my father- I am feeling called to do this work now, and I can’t ignore that calling. I dont want to wait until after he dies, and I dont want to just sit with it in silence.

There is, of course, so much more I could say. And in time I will write more about it here. I want it to be clear that many of the times this summer when my father would treat me in a way that I didn’t think was right, I would speak up. It lead to a lot of screaming matches. I also think it lead to a deeper understanding between him and myself. After all is said and done, we are actually extremely similar beasts. Along with going through pain and grief with him this summer, we also grew closer, seeing each other more clearly. We went to the beach together, he met my friends, I got him a pair of hip Adidas sneakers which he wore everyday for 6 weeks straight. He spent time getting close with Lola, eating ice cream every day (sometimes multiple times a day), and exploring Portland. He would wake up every morning and walk to the New Seasons Market by my house and buy himself the New York Times; he became a favored regular. We discussed a lot of interesting things, I spoke to him about unpaid femme labor, we talked about death and pain. I spoke more Spanish than I have in years and we gave Lola impromptu Spanish lessons around the breakfast table.

And so, here is the piece I wrote for class.

“My father loves to barbecue. When we were kids him and our step mother relocated from Spanish Harlem to boring-ass suburban New Jersey. My father was a professor at the time and they moved into on-campus housing. We were the only latino family in a Korean dominated apartment building, which faced a college quad. On one end were a few neglected picnic tables, splintering to the touch. And next to those those tables, some unloved public barbecues cemented into the ground.

Six years later BBQ man had worked his way out of bankruptcy and had bought a house in another shit suburb of New Jersey, right off the rotten egg stink of the New Jersey Turnpike. One summer night my father had the barbecue fired up. We were eating steak and sliced tomatoes with white onions, mixed with oil and salt and my favorite thing was to sop up the tomato juice with a slice of cheap white bread. White bread, devoid of all nutrients, always a treat at my father’s house, never allowed at my mother’s house; it’s mono-dimensional sweetness mixing with salt and fat to light up all the flavor centers of my tongue.

My father’s nightly enthusiasm for whisky and diet-caffeine-free coke far surpassed my enthusiasm for the white bread. My father lit cigarettes and took sips, removing himself further from our world, and soon he would be in his own dampened universe.

I wish I could remember how this happened, but for some reason the conversation turns to the topic of my tragically alienating experience of teenage pregnancy and corrective abortion. It has been 2 years since that day which feels so vivid and so distant all at once. It’s the smell of the shampoo that I stopped using- its scent too strongly linked to memory, it’s the feeling of a car moving me to a destination, my father and mother in the front and in control. And it’s the deafening silence from my step mother.  Its 365 days and another 365 days during which she doesn’t ask me if I hurt, hear me speak of the experience, help me feel less alone.

I feel the warm tears that I’ve held back start streaming down my face, sitting there before the dinner table, my family bearing witness to brushed off pain. To grin-and-bear-it pain, to sit-in-silence-with-it pain, to present-false-bravery-and-strength pain. To this-isn’t-such-a-big-deal pain. I ask my step mother- “where were you? Why weren’t you there for me?” She responds, crying. Some truth comes out; a missing piece.

“I wanted to be there for you, but your father forbade me from contacting you. He didn’t even let me speak to you; when I called that day he refused to put you on the phone. I wanted to tell you that I love you and that I support you. That I am here for you. But he wouldn’t allow it.”

I am appalled. I am shocked. I am taken aback. I turn to look at barbecue man- speak to this you drunk fuck, I scream in my head. But I know he is too far gone to take responsibility, nodding and mumbling, no one home to pick up the call.

I feel so betrayed, having been allowed to think that the woman sitting across from me had turned her back when I needed her most. The two of us, pawns in a game to keep my father in power and dominance over his children, time and distance an unanswerable equation of deep depression and a continued excuse for addiction.

His weakness comes into grotesque and sharp focus. I am 17 years old, the coals die out, the heat presses in, and I see that my father is a fallible creature.” 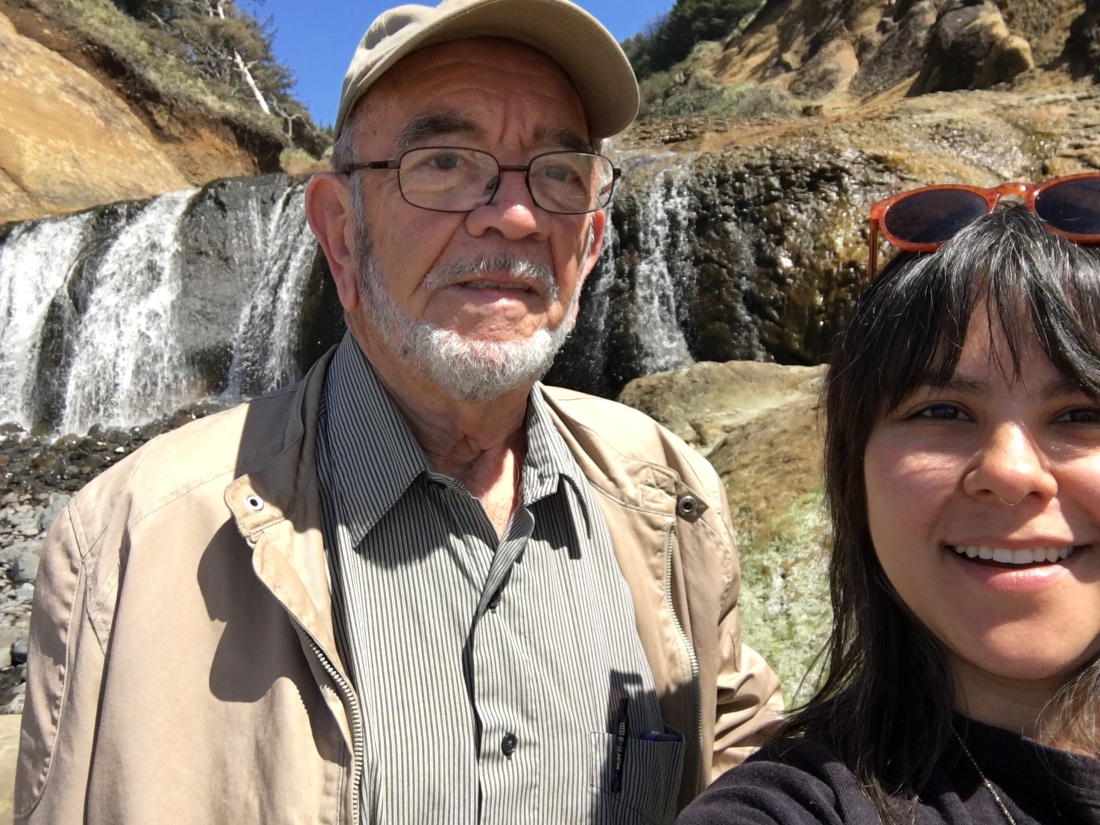